Badelgard is a northern nation facing the Elven Sea. Directly south lies a vast forest owned by the Zarubes, used as a royal hunting ground. East is a wilderness controlled by the Murghul horse chiefs, and north are the elves. Badelgard is separated from its neighbors by a set of sheer 2,000-foot high cliffs. Due to the high altitude, the weather of Badelgard is significantly cooler than the surrounding lands.

Badelgard is rocky and heavily wooded. Conifers predominate the uplands, and deciduous trees such as maples and aspens are found in the lowlands along the rivers. Due to the lack of arable farmland, bees are cultivated for their honey, which Badelgarders refine into their trademark drink: mead. The diet of Badelgarders consists mostly of fish and game, but animals such as pigs and cows are herded wherever possible. 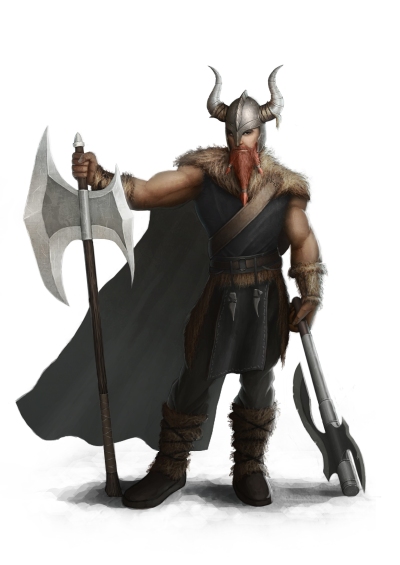 Warriors of Badelgard are known for their large stature and immense strength.

Warriors of Badelgard are known for their large stature and immense strength. Man for man, few can stand against their swords and battle-axes.

Following the arrival of humans in Badelgard, the original inhabitants of the land—the Ulfr—died off.

After the land was conquered, it was divided into hundreds of small clans ruled nominally by a High King. Around the year 600, the ambitious warrior Magnus Osvaldsson gathered an army, then attacked and killed the reigning High King Finn. Some, thinking his rule was illegitimate, rebelled against him. This resulted in the Wars of Accession from Y.E. 601 to 609. At last, thinking the situation unmanageable, Magnus Osvaldsson divided up the land between seven of his generals and named them protectors of the realm, or Wardens.

Magnus Osvaldsson spent the rest of his life in frolic and drunkenness. He died childless, and the seven divisions of the land became the seven earldoms. The descendants of the Seven Wardens gave themselves the title of earl, and a new High King was set up: Harald Trowfell. Harald wrote a law code that greatly favored the descendants of the Wardens and elevated them above the common, or lowborn. He also demoted one Warden family—Sven and Astrid Riverhall of Andarr’s Port—to the station of barons.

Throughout this period, wars raged between the various noble houses. In time, the Osters secured the throne of High King and renamed Rigthorpe, “Oskir.” They secured their reign not by brutality but through the good treatment of the other earls. The luxurious guesthouses of Earls’ Court were built, among other concessions.

It was during the Age of the Wardens that the Ulfr Crisis began. The story is recounted in Fell Winter, High Queen, and Dragon’s Son.

After the Crisis, a fractured and severely depopulated Badelgard began a slow recovery. The noble houses of the Seven Wardens continued on, but faded greatly in power. It was at this point that Badelgard began to look outward.

The Badelgarders sought vengeance for the injustices of the Ulfr Crisis and the atrocities of the outsiders. They left on huge raiding parties that ended in success. Gold, jewels, and other loot were carried back to the nation. Oskir turned from a backwater town to an incredibly wealthy city. Some Badelgarders called this epoch of plenty a “Golden Age.” The pillaged nations, however, called it “The Northern Terror” (among humans) and “The Human Desolation” (among the elves).

Nocturne, Son of the Night takes place during this period.

Partially out of vengeance for the raids, and partially out of desire for wealth, the Zarubes of the south did the unthinkable: build a ramp large enough to climb the Sky Cliffs (not even their navy could breach the war-boats of Andarr’s Port). A vast army of knights, fey-priestesses, and soldiers entered and occupied Oskir and the whole of the nation. The Priests of the Dragonmount started a rebellion, calling for the death of the occupiers for the glory of the Green Dragon. Rebel strongholds continue to this day.