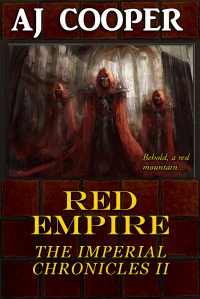 Trust no one. To survive to my age, you must judge men’s character well. Fear your enemies, yes. But fear your friends even more.

With the death of Claudio-Valens Adamantus, many fear the golden age will come to an end. In the Imperial Palace, his wife Anthea struggles to survive conspiracies and assassinations. Her only ally is Melorra, priestess of the mother goddess, whose commitment to nonviolence may prove her undoing.

Though barbarians attack from beyond the northern wall and power-hungry councilors do their best to achieve the White Throne, the greatest threat may come from far away. Scarlet-cloaked refugees and their queen Lidda arrive on ships and defame the gods, proclaiming the Devil has been reborn on the Red Mountain.

The Empire’s only hope may lie in the cryptic words of Anthea’s dreams: “The blood of the god, and the body of adamant.”

The second novel of the Imperial Chronicles. Next, read Shadow and Flame.

The first novel is now free.