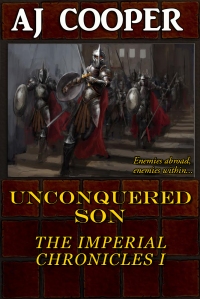 The Empire teeters on the brink of collapse. A hedonistic teen assumes the throne under false pretenses while a slave rebellion erupts in the north. The southern King of Kings, sensing weakness, sets his eyes on his vulnerable foe.

In the midst of the growing tumult, a young man from the Empire’s hinterlands grudgingly heads to Imperial City. There, Claudio-Valens sees firsthand the weak, treasonous Imperial Council that aids foreign enemies, and finds himself at the center of the fight to save the country he loves.

What follows is a tale of desert queens and legionaries, of mad girls with great gifts and scheming highborn ladies, of gods both human and divine, that will forever transform the world they know.

Free at Amazon US, Amazon UK, Nook, or iBooks.

The first book of the Imperial Chronicles. Next, read Red Empire.